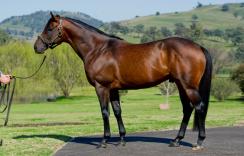 Myboycharlie, a son of Danetime, will have numbers on his side when his first foals eventually grace the racecourse, as he covered 80 mares in his first book at the National Stud last year and 105 mares in his second book in Australia.

Among the mares to have visited Myboycharlie at the National Stud last year were Molecomb Stakes winner and King’s Stand Stakes runner-up Misty Eyed and the dams of dual Sun Chariot Stakes winner Sahpresa and Grade 1 winner Amorama.

Speaking to the Racingpost, National Stud managing director Brian O’Rourke said: “Myboycharlie has covered 80 mares in his first northern hemisphere season in a year that has been tough for first-season sires.

“We are extremely pleased with the quality of mares covered and with the stallion’s fertility; he finished his season with 98 per cent of his mares in foal. We are really looking forward to seeing examples of his first foals up here.”

Startantes (#StarTurn) is backing up in the @aus_turf_club Flight Stakes on Saturday after a bold finish in the Gr.1 Golden Rose.
She currently holds the 2nd highest rated performance by a filly this season! http://disq.us/t/41g961o

Even a couple of days late the strong finish by Vital Source (#Headwater x Prerequisite) on the Sunshine Coast is still impressive!

What a finish in the #TestaRossa Stakes! Especially when the winner (Chaillot ex Mary Of Modena @BaramulStud) is by Testa Rossa & a close 2nd placegetter was #VineryGraduate Begood Toya Mother (ex Lady Of Helena).