Myboycharlie has cleaned up in feature races worth $300,000 on the first day of the winter carnival at Doomben.

The Doomben double capped a big week for Myboycharlie.  Both winners are out of mares by Falbrav and they both have Group 1 targets in June.

Trainer Liam Birchley is confident Blueberry Hill has more stakes wins in store.  “She has been an emerging horse for us and has kept improving all the time.  There isn’t much of her but she deserves a crack at the big races.”

A homebred for Peter Marshall and his daughter-in-law Karen, she won at Doomben and Sunshine Coast before losing her unbeaten record when an unlucky second in the G3 Ken Russell Classic at the Gold Coast on Anzac Day.

Birchley will set Blueberry Hill for the G2 BRC Sires’ Produce Stakes on May 30 and G1 J J Atkins Stakes on June 6.

Charlie Boy returned to winning form at Doomben on Saturday and his Group 1 assignment on June 6 is the $2 million Stradbroke Hcp (1350m).

“The Stradbroke is his winter goal and his next run will be in the Doomben 10,000 or the QTC Cup,” trainer Peter Snowden told AAP on Saturday.  “There’s plenty of improvement to come.”

Charlie Boy hadn’t won a race since the G2 Danehill Stakes at Flemington in September 2013.  “Gelding the horse before this campaign has been the making of him.  I thought he looked too soft in the enclosure so he’s definitely on an upward spiral.”

Myboycharlie (Ire) has a rising tide of winners world-wide springing from shuttling between Haras du Mezeray in Normandy and Vinery Stud.  His Group 1 fillies Euro Charline and Peggy Jean broke through the glass ceiling last year and Euro Charline will answer her next challenge at Royal Ascot next month after visits to the USA and Dubai.

On Wednesday in Hong Kong, trainer John Size unveiled Happy Surveys to win on debut at Happy Valley.  The Myboycharlie gelding charged home under Joao Moreira to win the Lyrebird Hcp (1200m).  “Joao rode him quietly and he was able to swoosh home and win,” Size said.  “He looked all right to the eye and winning the first time out is always a positive thing.”

Myboycharlie sired a two year-old debut winner earlier in the week when French-bred colt Dragon Rouge was successful in the Prix du Coq Hardi (1000m) at Bordeaux.  He is trained by Didier Guillemin who also prepared Myboycharlie filly Jardin Fleuri to win a juvenile sprint by 6 lengths in Bordeaux last month. 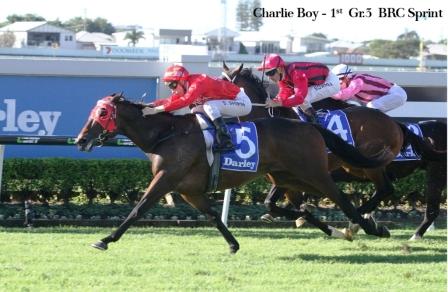 $170,000 for @BaramulStud's filly by #AllTooHard out of Stakes winner Telepathic. She was snapped by Lion Rock Bloodstock @benkwok44444 & @lindsayparkrace today at the @mmsnippets National Yearling Sale👌

Can't wait to see what this Golden Slipper winning #VineryGraduate can do as a 3yo.