CONGRATS ALL ROUND AS SALE RING SALUTES STAR

PATRONS of reigning USA Champion First Season Sire Congrats are reaping the rewards on the track and in the sale ring after a string of his high priced youngsters have changed hands so far this year.

The striking son of A.P Indy was the surprise packet of his generation as the sire of 22 individual two-year-old winners including two Grade 1 winners and a further 13 Stakes horses from his first crop.  Congrats has already produced a first crop 3yo Stakes winner this season and his progeny give every impression of improving with maturity as their sire did.

Buyers who recognised Congrat’s potential in his debut season have been resoundly rewarded as the success of his opening crop carries over into the new season.

There was heavy demand for Congrat’s second crop at the prestigious Ocala Breeders’ March sale where agent Seth Semkin forked out $350,000 for an outstanding colt who breezed his quarter mile in a slick :21.2s.

”I like his performance on the track, and he seems like the right sort,” Semkin told Thoroughbred Times’ news editor Ed DeRosa

”We tried to get a filly by him at the Fasig-Tipton Florida sale of selected two-year-olds in training, but we were outbid. (New owner) Mr. B. Wayne Hughes was excited at the chance to get this one, but we knew it wouldn’t be a secret.”

A stallion of considerable ability, Congrats moved from Florida to Kentucky this season and will shuttle to Australia in August for the southern hemisphere season. 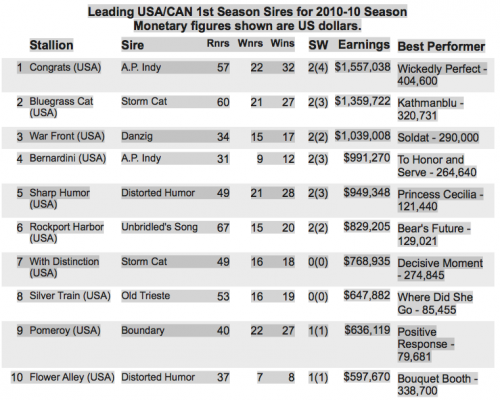 Brilliant finish to the Listed @tabcomau Ipswich Cup as Happy Go Plucky notches up his first stakes victory – at start #62. Sold by @VineryStud for $7,300 at the 2015 @mmsnippets National YS, Happy Go Plucky has won $450k and becomes the 5th SW for Pluck. #ItPaysToBuyAustralian

“And Beads is going to be much too good!” Another winner for #StarTurn with a dominant performance from the 2yo gelding taking out r1 at Belmont @PerthRacing ⭐️ 🌟

Casino Kid (#CasinoPrince) was VERY impressive over 1500m in the @tabcomau Hwy at @royalrandwick on Saturday, taking his earnings past $115k. The 3yo gelding from Cyclone Annie (Hurricane Sky) is trained by Jan Bowen and was ridden by in-form jockey Reece Jones.

Reece Jones is quickly stamping his mark on the Sydney racing scene as he pilots home another metro winner, this time with CASINO KID (#CasinoPrince) in the @tabcomau Highway at @royalrandwick!