MYBOYCHARLIE TO SHINE AT NEWMARKET

EXPERT horseman Craig Anderson is hoping to parlay the success of Myboycharlie’s first crop of weanlings sold on the Gold Coast into next week’s Inglis Weanling & Bloodstock sale in Sydney.

Anderson’s Amarina Farm at Scone sold four Myboycharlie weanlings at this month’s Magic Millions National sale for a combined total of $178,000 at an average price of $44,500.

As well as that figure representing a four-fold return on Myboycharlie’s 2010 service fee, it also stood up very well against the overall sale average ($26,174).

”Myboycharlie throws pretty much to type,” says Anderson who has seen plenty by the Vinery Stallion.

”They are very much like their father. Myboycharlie was a two-year-old himself so hopefully we’ll be able to get his progeny out and running, they look that way at this stage.”

Amarina Farm are sending all nine of the former Group 1 winning juveniles to the Inglis sale which begins on Wednesday 23 June at Newmarket and Anderson reckons buyers will be pleased with the offering.

”There are several nice ones amongst them,” he says,”the syndicate that bought the stallion purposely bought some nice mares to breed with the horse and get the ones out there.”

Including among the consignment is Lot 62, the first foal of stakesplaced mare Class Prevails whose grand-dam, Palace Revolt, won the Group 1 AJC Sydney Cup (3200m) on one of the heaviest tracks ever seen at Randwick. 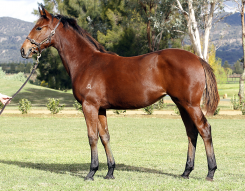 “This stallion is a real chance, the colt I bought out of Body Beautiful had
athletism and balance, he looks a racehorse. He will be an ideal Karaka
million horse.” – Gordon Cunningham

“The filly out of Come Fly With Me is a star, the best filly on the ground.
Myboycharlie was naturally brilliant 2yo and his stock have really
impressed.” – Dermot Farrington
“Just very consistent horses. They were good bone and muscle weanlings that
look like they will be well suited to Australian racing conditions.” – Bill Mitchell

“The first weanlings by Duke Of Marmalade, Myboycharlie and Henrythenavigator are being well looked at. In my opinion they are the best first-season sire weanlings. Most have size and scope and look the right types for the Australian market, there are certainly some very good comments on those.” – Tim Brown (Magic Millions)

We are finally getting some beautiful Autumn 🍂 colour in the Upper Hunter. Nothing to compare to Fall in the Northern Hemisphere but when I see a change in the season in Australia I get excited 😊 #CasinoPrince @vinerystud being lead out to his paddock for daily exercise.

Headwater is gaining some momentum with another debut winner at Sunshine Coast on Wednesday , Be Water My Friend https://www.breednet.com.au/news/10296/another-promising-debutant-for-headwater @VineryStud @SamuelPOrton @TB_NSW

Be Water My Friend gives #Headwater another winner!
The speedy 2yo was all class, saluting by a couple of lengths on debut at @SCTurfClub for trainers @tjsearsracing, Maddysen Sears & jockey Michael Cahill.