We are proud to present to you the Vinery Stallion Roster for 2010 , an assembly of stallions offering great depth and variety, providing excellent value and opportunity to breeders across the board.

The greatest endorsement for any stallion roster is the success achieved on the racetrack and the Vinery stallions continue to provide runners of the highest quality. More Than Ready gave us the winners of both the 2008 and 2009 Magic Million and Golden Slippers, while three of the best females in the country at present have collectively bagged a multitude of Group Races between them in Ortensia (Testa Rossa), Typhoon Tracy (Red Ransom) and More Joyous (More Than Ready).

*all fees are inclusive of GST

We have two exciting additions to our stallion roster this season in Big Brown and Onemorenomore. Big Brown, an exceptional racehorse and widely regarded as the most dominant winner of the Kentucky Derby since Secretariat was bred to run on turf, doing so in emphatic style by winning his first start as a juvenile by over 11 lengths (on turf). He then went to the dirt surface to win by an even further margin before easily winning the Gr1 Florida Derby at his next start, setting the course for the Kentucky Derby. His sire, Boundary (by the mighty Danzig from the Damascus mare Mien) is a multiple Group winner who also won his first starts on turf over 6 and 7 furlongs in distance.

Onemorenomore the exciting son of Red Ransom from one of the best families in the Stud Book is certainly a worthy representative of his late father. As a 2 year old he won the Listed Baillieu and then brilliantly won the Group 1 Champagne Stakes by a widening 4 lengths, defeating Tickets and Manhattan Rain and making him the only son of Red Ransom to win a Group 1 as a 2 year old. As a spring three year old Onemorenomore was placed at Group 1 level against the older horses before his untimely retirement due to an unfortunate training accident. Red Ransom (USA), a son of Roberto is rapidly establishing himself as a sire of sires in Australasia and with an exceptional female family, Onemorenomore represents another valuable outcross for our broodmare population.

More Than Ready’s fee has been reduced offering breeders a great opportunity during difficult times for a stallion of such success and future potential. The impact More Than Ready has made to date on the Australian racing scene has been dramatic, proving himself the best outcross for the plethora of Danehill mares we now have in our broodmare bands. Fillies by More Than Ready were highly sought after at the recent Sydney Broodmare sale, offering breeders many opportunities to access a wider range of stallions. Many of the best mares in the country have visited More Than Ready over the past two seasons, ensuring his ongoing success at the highest level in the future.

Testa Rossa is coming off his best year to date and will be afforded a slight increase in service fee this year, yet still standing as one of the best value proven stallions in Australia. Consistently in the top ten sires by earnings, Testa Rossa’s success is evident by his high ranking on the individual winners list. His status amongst the stallion ranks is sure to continue considering he has just come off his fourth book of quality mares in the Hunter Valley.

We were delighted with the support Group 1 winning juvenile Myboycharlie received in his first season at stud last year. He covered a quality book of 94 mares, including a good number of stakes runners and stakes producers from all states of Australia. At the recent breeding stock sales mares carrying service to Myboycharlie sold for up to $200,000 with an overall average of over $50,000; excellent results considering his fee has been reduced to $11,000 for the coming season.

Since his arrival at Vinery several years ago breeders have shown a lot faith in Mossman and that faith is now being rewarded with some exceptional results both on the racetrack and in sale rings this year. Three-year-olds such as stakes winners Neeson and Love Conquers All have led the first sizeable crop Mossman has had for a number of years. This has been well followed up with a current crop of two-year-olds already producing 9 individual winners. With juveniles such as Stirling Grove, Mafia Miss, Buffering and Parriwi his stock have been popular at the sales (selling to $290,000 during 2010) and are sure to remain so into the future.

Young stallions Excites, Benicio, Bel Danoro and Dubleo complete the 2010 roster. Fees for these stallions will remain the same or decrease slightly to assist breeders still recovering from the global financial crisis. 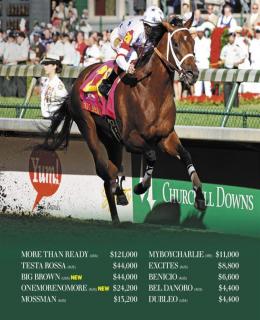 In a further commitment to breeders we have announced that all Vinery stallions will carry a transferable free return if a mare fails to deliver a live foal (conditions apply). This allows the free return to carry over to the new owner when a mare is sold, providing a very attractive benefit to breeders both selling and purchasing mares in foal to the Vinery stallions. Through our stallions we have enjoyed considerable success on the racetrack and with the support of loyal breeders we look forward to the future of the industry as a whole.

All Prices include GST. All Vinery stallions carry a transferable free return if your mare fails to deliver a live foal (conditions apply). Payment is not due until June 15 2011.

We're so excited for #AllTooHard's ALLIGATOR BLOOD & #VineryGraduate ARISTIA to have been voted into the Top 10 for the #AllStarMile!
Mr Popular, #AlligatorBlood, is over 6,500 votes in front of his nearest rival this year & received over 8,700 votes more than last year's fave!

Exceedance had time to pose after his quiet jump out at #Flemington this morning, with the glamour colt getting ready for the @SeppeltWine Newmarket HCP on March 7.

“Press Statement - different class.” Gr.2 Hobartville Stakes this weekend & it was Press Statement who took out the 2016 edition in dominant fashion. Fast forward to 2020 & the dual Gr.1 winner has made a strong start to his stud career siring 2 classy winners. #MakingAStatement

Trainer @edancue had nothing but praise for his Casino Prince filly #SUNBORN on @SkySportsRadio1 this morning.
She will take her place in the Silver Slipper Stakes at Rosehill Gardens a lead up for those on the Golden Slipper path.
@AndrewAdkins103 takes the ride.

Great write up about #VineryGraduate and now dual-Stakes winner BONVICINI (@cmaherracing) as well as #CasinoPrince daughter SWEET DEAL (@JTRacingRwik) & #AllTooHard son ALLIGATOR BLOOD (@VandykeRacing1) - all added a Group 3 win to their names over the weekend!