ALL TOO HARD COMING OF AGE

The tide can turn quickly for a young stallion when the winners start to flow.

Vinery Stud’s All Too Hard has had a heavy weight of expectation placed upon his shoulders from the day he was born.

As a half-brother to Black Caviar, he topped the 2011 Inglis Australian Easter Yearling Sale when fetching $1,025,000 and has been in the public spotlight ever since.

A brilliant career on the track ensued with Group success as a two year-old and then a spectacular three year-old campaign that featured four Group I victories and saw him voted second to Black Caviar in that years Horse of the Year awards.

Similar success at stud was seen by many as a formality.

That success is now starting to unfold with two classy winners emerging in the past two weeks in The Mighty Fed (two wins at Warwick Farm and Randwick) and now Allied Power, the Breednet ‘One to Watch’ on Thursday at Gosford (read about him here). 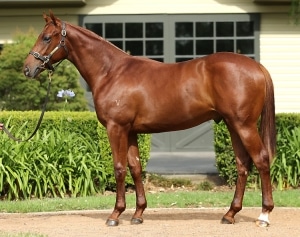 Allied Power was a $470,000 Magic Millions purchase for the China Horse Club

Their success builds on the string of 12 additional place-getters All Too Hard has already posted, headed by Black Type performers All Too Huying and Mystic Empire, plus his New Zealand trained winner Lincoln Hills.

All bar one of those dozen place-getters have finished top three in metropolitan races which speaks volumes for their true ability.

The spate of ongoing wet tracks in recent months may hold a clue as to why All Too Hard may not have had the winners many anticipated as the horse himself never raced on anything worse than a good surface.

Interestingly, neither did his half-sister Black Caviar, whose unbeaten 25 wins were all on dry tracks.

The reality is we may be looking at a very different picture if the East Coast of Australia had not been hit with two of the wettest March and April months in history.

The yearling sale season is coming to an end and the last big sale comes at the Gold Coast next month when Magic Millions present their National Yearling Sale over three days on June 6, 7 and 8.

All Too Hard will have big representation with 17 youngsters to be offered,click here to see them.

We are finally getting some beautiful Autumn 🍂 colour in the Upper Hunter. Nothing to compare to Fall in the Northern Hemisphere but when I see a change in the season in Australia I get excited 😊 #CasinoPrince @vinerystud being lead out to his paddock for daily exercise.

Headwater is gaining some momentum with another debut winner at Sunshine Coast on Wednesday , Be Water My Friend https://www.breednet.com.au/news/10296/another-promising-debutant-for-headwater @VineryStud @SamuelPOrton @TB_NSW

Be Water My Friend gives #Headwater another winner!
The speedy 2yo was all class, saluting by a couple of lengths on debut at @SCTurfClub for trainers @tjsearsracing, Maddysen Sears & jockey Michael Cahill.